*Probably one of the most well-known satirical song writers is Weird Al Yankovic. He creates parody songs from popular songs and his songs have attracted a lot of attention. Read more.. http://www.imdb.com/name/nm0946148/bio?ref_=nm_ov_bio_sm

In class yesterday, we were given a packet on comedy, which included the different types of comedy along with techniques used to achieve a comedic effect. My teacher had us read the packet and pointed out the most crucial parts, one of the most important being that you can’t be funny and mean at the same time. In my opinion, a lot of people are unable to distinguish the difference between the two. What they believe to be funny is hurtful or offensive to another person. Comedy is extremely subjective and it can be difficult to know whether or not you’re crossing the line when making jokes to people. I’ve experienced moments where I offend someone when I’m just joking around. Insulting people shouldn’t be considered comedy unless they laugh along with it, in my perspective. Racist, sexist, or any of those type of jokes are best told in private to a person you know would understand that you’re not being serious.  It’s also important to laugh at yourself.  You shouldn’t put yourself down all the time, but it’s also not okay to always take things to heart. 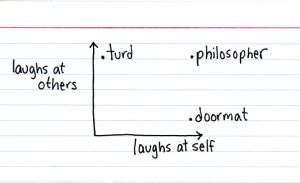 My teacher also went on to say that people who laugh at others and their misery are horrible people. Well, it depends. You shouldn’t be malicious; humor isn’t about being mean and hurtful to others. It seems that a lot of popular stand up comedians have some offensive jokes, but they’re considered geniuses, not bullies. Of course, I’m not saying this applies to all cases. Picking on kids at school, for example, isn’t cool, but that’s common sense, and I think that’s what he meant by it. Teasing others isn’t okay and if you are turning a blind eye to it, you are just as guilty as if you were the one directly doing it. Where I live and the schools I’ve attended, there doesn’t seem to be as much bullying as they show in movies or describe in books. Most bullying seems to be online nowadays, which isn’t any better. Rude comments on You Tube are frequent and people believe they are being funny when they’re just being cruel.

I’m a very sarcastic person, like really. Sometimes, people don’t know me well enough to know what I think is funny. So I make sure to censor what I say online or in public because people could always take it the wrong way. Life is full of misunderstandings so you have to constantly be watching out for those times where a situation or statement you’ve said can be taken wrong.